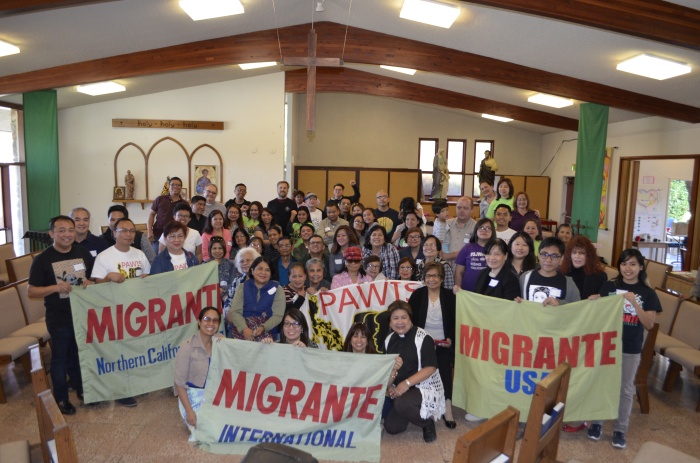 Migrante Northern California together with the Rainbow Bright workers and community allies at PAWIS San Jose’s Know Your Rights Training on October 6.

We, Filipino migrants and workers representing Migrante Northern California, stand in solidarity and salute the workers of Rainbow Bright for their courage to assert their rights and to expose inhumane working conditions they were made to endure.

In a statement released by California Attorney General Xavier Becerra on September 7, the suspects identified in this despicable treatment of workers in Rainbow Bright facilities as certain members of  Gamos family.The Attorney General estimates that more than 100 employees were victimized and abused throughout the ten-year period by the Gamos Family. Charges range from grand theft of wages totaling $8.5 million, human trafficking, tax evasion, possession of illegal weapons, and rape. Altogether, 59 criminal charges were filed against the four members of the Gamos Family.

Migrante calls on the workers of these facilities to be steadfast in their quest for just and humane working condition. We also call on the former employees to reach out and be part of this fight to deliver justice to all victims — past and present.

As an organization advocating the rights and welfare of Filipinos worldwide, we in Migrante  are firm in our belief that it is only when we stand strong and united, hand in hand with other organizations, that cases against abusive employers will be brought to justice. We will stand with the Rainbow Bright workers until justice is served.

Migrante also believes that the rise in cases of abuse against Filipino migrants worldwide are directly tied to the dire socio-economic conditions brought about by anti-people policies in our homeland. Widespread and chronic unemployment, poverty and landlessness drive 6,000 Filipinos to leave the country everyday in search of work abroad, many of whom endure various forms of abuses and exploitation.

Thus as Filipino migrants in the U.S., we also demand support and protection from the Philippine government through its representatives in the Philippine consulate whose mandate is to safeguard the welfare of our kababayan abroad.

Justice for the Rainbow Bright Workers!

If you would like to help the Rainbow Bright workers or want more information, please contact Migrante Northern California at 650-491-9113 or email us at migrante.northern.california@gmail.com.

View all posts by Community