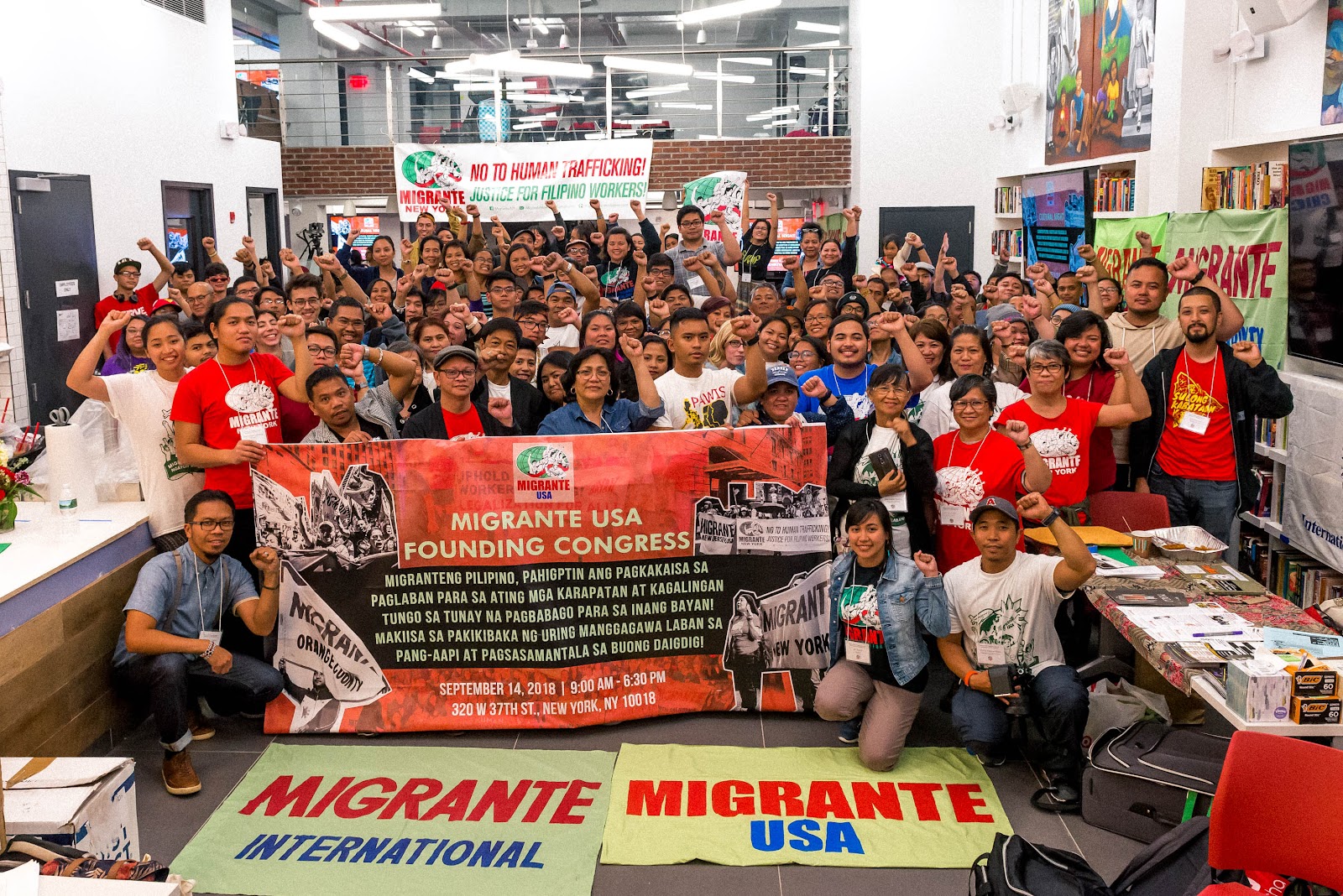 NEW YORK, NY—More than 200 Filipino workers, their family members and allies gathered on September 14, 2018 to hold the founding congress of Migrante USA, a nationwide alliance of Filipino migrant and worker organizations in the U.S.

The founding congress comes in the midst of some key workplace issues that confront Filipino workers and migrants in the U.S. today such as the $8.5 million wage theft and labor trafficking case of Rainbow Bright in Daly City, CA; the certification of Filipino nurses as a class in a lawsuit against SentosaCare, a network of care facilities in New York being sued for labor trafficking; and various worker strikes such as in Marriott hotels in the San Francisco Bay Area as well as on various campuses of the University of California.

“Makasaysayan ang idinaos nating konggreso dahil ito ang kauna-unahang alyansa ng manggagawang Pilipino dito sa U.S. Mahalagang may boses ang mga manggagawang Pilipino hindi lamang dahil kami ang mas nakararami sa mga Pilipino dito kung hindi dahil kailangan din naming makialam sa nangyayari sa ating bansa dahil ito ay nasa interes namin (The congress we just held is historic because it is the first alliance of Filipino workers in the U.S. It is important for Filipino workers to have a voice not only because we make up the majority of Filipinos here [in the U.S.] but also because we need to engage in matters concerning our country because it is in our interest),” says Gary Labao, founding Vice Chairperson of the alliance.

In the proceedings the founding of Migrante USA, keynotes speeches were given by Garry Martinez, Chairperson of Migrante International, as well as by Elmer “Ka Bong” Labog, Chairperson of trade union federation Kilusang Mayo Uno. The founding congress also conducted discussion on and ratified important alliance documents such as the constitution and by-laws as well as a study on the orientation of the progressive movement of overseas compatriots. The delegates of the congress discussed the history of Filipino migration, its root causes as well as Philippine neoliberal policies such as the Labor Export Program (LEP).

In their program of action, the congress resolved to tackle labor trafficking in the U.S., to campaign for the rights and welfare of Filipinos in the U.S. and to address current issues in the Philippines in the coming years.

The new migrant worker alliance also joined Bayan USA—a multisectoral, progressive Filipino alliance—in a protest on Sunday at Grand Central station and at the Philippine consulate. Altogether amounting to more than 300 people, they condemned the spate of drug-related killings, are curtailment of basic rights such as press freedom and freedom of movement and persistent economic hardships due to the tax reform law and contractualization policies.

View all posts by Community